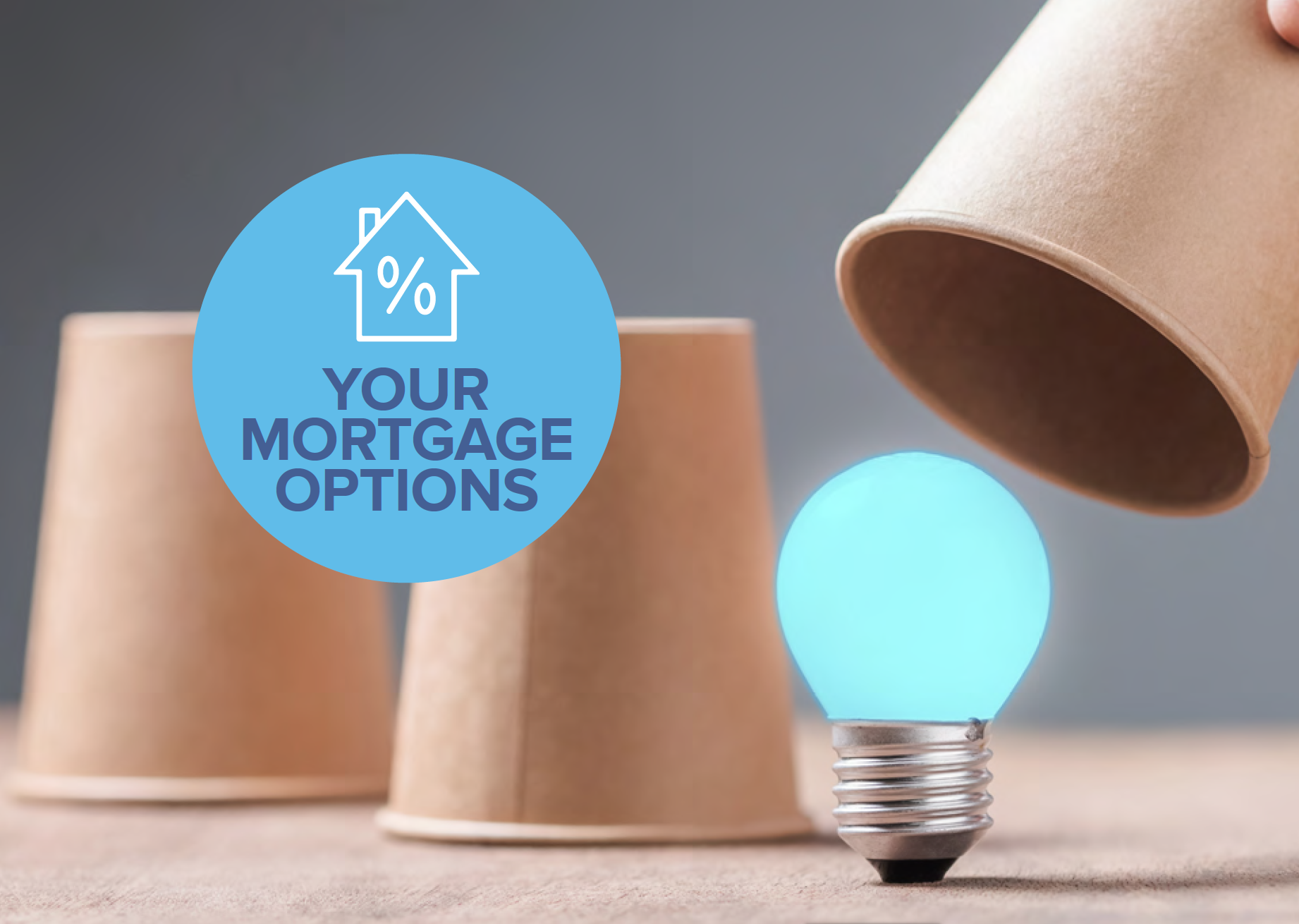 Which type of mortgage is right for you?

Fixed or Variable? We explore the options available to you.

With constant changes to interest rates throughout 2022 and rising costs it can be tough to decide which type of mortgage is the best for your bank balance in the long run. Our guide looks at the pros and cons of each type to help prepare you for your next mortgage appointment.

The Bank of England Base Rate

Before we delve in to the different types of mortgage rates, it’s worth briefly explaining the Bank of England Base Rate as this can influence other interest rates in the economy, including the mortgage lending rates offered by high street banks, building societies and specialist lenders. Set by the Bank of England’s Monetary Policy Committee every six to seven weeks, the base rate is a benchmark for the cost of borrowing money. If the base rate rises (as it has done throughout 2022), borrowing could become more expensive for you as mortgage lenders base the rates they charge on it. So if you are looking to get a mortgage the base rate plays a part in your ability to pay. Currently, the base rate stands at 3.5%*.

With a fixed rate mortgage you lock in to pay a fixed amount, regardless of what the Bank of England Base Rate is doing and any interest rate changes.

Your lender will offer you this fixed rate for a period of time known as the incentive period, typically lasting for two, three or five years, (although there are longer incentive periods depending on lender).

A fixed rate will give you certainty as you know exactly what you will pay each month, allowing you to budget effectively. You are protected from any rate increases during this period, however this also means you will not benefit from any decreases either. The other thing to consider is how long you want to be fixed for as leaving a fixed deal early usually incurs early repayment charges. 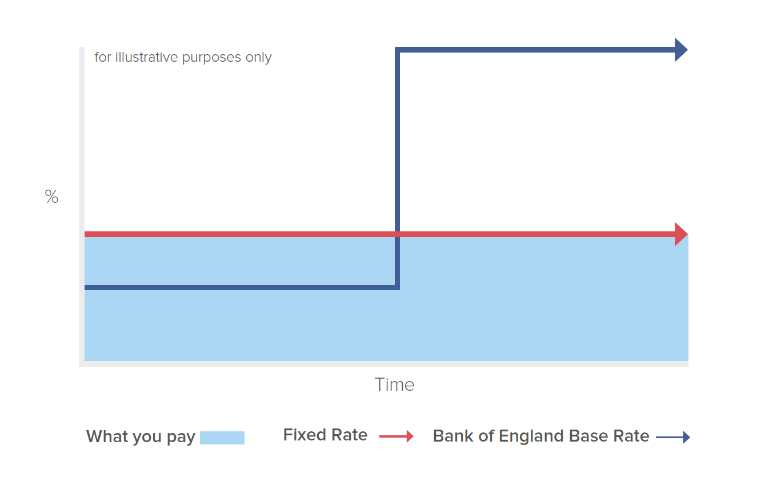 A variable rate mortgage will vary, moving up and down in response to changes in the economy.

A Tracker mortgage is a type of variable rate as it ‘tracks’ something in the economy (in most cases the Bank of England Base Rate). What this usually means is your payments will follow the Bank of England’s Base Rate, plus additional interest from the lender for a certain period of time. For example, if you took a tracker mortgage at the current base rate (3.5%) plus an additional 1%, your payments would be at 4.5% (3.5% Base Rate + 1% tracker).

Payments on a tracker mortgage therefore more accurately reflect the current market as the amount you pay each month will be impacted by the changing base rate. You are not protected from rate increases like a fixed rate mortgage, but the good news is you would also immediately benefit from any rate decreases. Using the example above, if the base rate increased from 3.5% to say 4%, your new tracker rate payments would increase to 5% (4% Base Rate + 1% tracker). If the base rate decreased to 3%, your payments would track this change and also decrease, bringing your tracker rate payments down to 4% (3% Base Rate + 1% tracker). 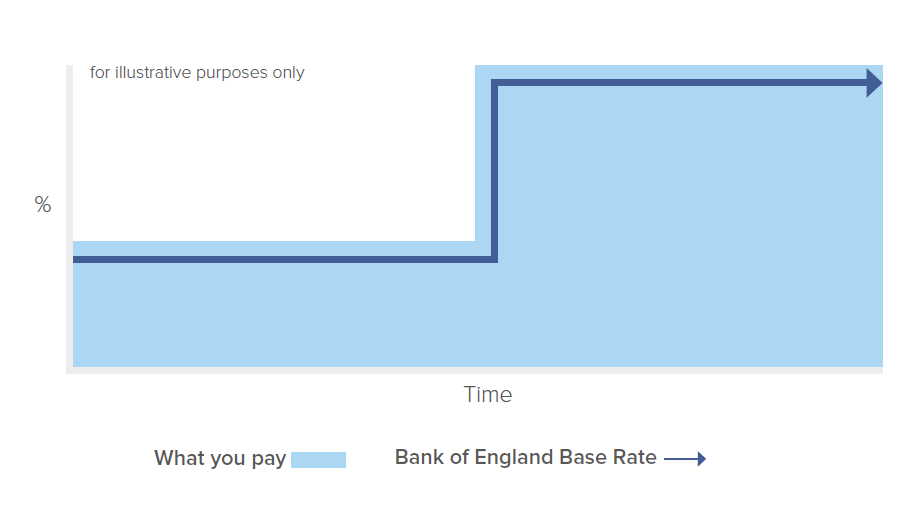 Each lender sets their own Standard Variable Rate (SVR) which they can move up or down as they choose. In most cases the SVR is heavily influenced by the Bank of England Base Rate and so tends to roughly follow this rate plus additional percentage points added on. It’s important to note that they do not have to follow the Base Rate and SVRs vary massively between lenders. If the Base Rate changes, the SVR (usually, but not always) follows suit, meaning a change in your monthly payments. Unlike a base rate tracker, the lender can change their SVR at any time for commercial or economic reasons, meaning less certainty on your monthly outgoings.

The SVR is what most borrowers move on to at the end of a fixed rate incentive period. At this point, it is wise to consider switching to a new rate (remortgage) as SVRs are usually more expensive than the other mortgage options covered above.

The benefits of an SVR are you are unlikely to have to pay any arrangement fees or incur early repayment charges as you aren’t locked in to a specific deal, giving you the flexibility to switch to a new rate if needed. This obviously depends on your circumstances and how much of your mortgage balance you have left to pay. Speak to a mortgage consultant to make sure you are on the right deal for you.

Speak to a mortgage adviser

How do I choose between a fixed or variable rate mortgage?

Ultimately it comes down to the question - how important is it to you that your repayments stay the same each month? With a fixed rate you are paying a premium for the security of knowing exactly what your costs will be. With a variable rate you are taking the risk that it will cost less in the long run, however there is no guarantee that this will be the case as your monthly mortgage repayments are at the mercy of the market.

Another important thing to consider is when looking at types of mortgage, low rates aren’t the only thing to look for when searching for the ‘cheapest deal’. You need to look at the overall cost of the mortgage product, factoring in additional fees, lender criteria and the length of time (mortgage term) you wish to borrow for.

An appointment with a qualified Mortgage Consultant should be on the top of your to-do list this year to get the best advice based on your individual circumstances. A Countrywide Mortgage Services Consultant can talk you through these options in more detail and compare thousands of deals from a panel of carefully selected lenders to help find the right mortgage for you.

Find out more
Correct at the time of publishing – 19/01/23
Sources: *https://www.bankofengland.co.uk/boeapps/database/Bank-Rate.asp

ALL MORTGAGES ARE SUBJECT TO STATUS AND LENDER CRITERIA.

MOST BUY TO LET MORTGAGES ARE NOT REGULATED.

A BROKER FEE MAY BE PAYABLE UPON MORTGAGE APPLICATION AS WELL AS AN ADMINSTRATION FEE. THE TOTAL FEE PAYABLE WILL DEPEND ON YOUR CIRCUMSTANCES. YOUR MORTGAGE CONSULTANT WILL EXPLAIN ANY FEES APPLICABLE IN YOUR INITIAL APPOINTMENT.

YOUR HOME OR PROPERTY MAY BE REPOSSESSED IF YOU DO NOT KEEP UP REPAYMENTS ON YOUR MORTGAGE. YOU MAY HAVE TO PAY AN EARLY REPAYMENT CHARGE TO YOUR EXISTING LENDER IF YOU RE-MORTGAGE.